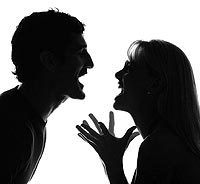 Dear Coming Through The Rye Staff,

Lately my boyfriend and I have been going through some issues.  We’ve both been stressed and been arguing quite a bit over small things.  We’ve been together for almost three years now, and I truly think he is the one.  We see each other everyday, and I spend the night at his house almost every night.  Lately, he has seems really distant.  I confronted him about it, and he said he just isn’t as happy as he used to be because we fight so much.  He wonders if he would be happier single.  He says he wants to be able to sleep alone and do things independently without worrying if I would be upset.  Hearing this absolutely killed me.  However, he also said he still loves me and he does want to be with me.  He just doesn’t know how and if we can fix things.  I’m so confused now.  He decided he wanted to stay with me and to try to work things out.

One part of me desperately wants to try to spice up the relationship and remind him of why we are together and how in love we are.  However, the other part of me wants to give him space and let him be alone to miss me and realize he wants to stay together.  Although, I am terrified he may decide he likes being alone, and he won’t come back to me.  I really want to stay together, and I have no idea which approach to use.  Should I spice things up and remind him of why we are in love, or should I give him space?

Thank you for writing to us here at Coming Through the Rye. When I feel like I’m losing someone, I always tell myself to let go and if they come back, they were always mine to begin with. If they don’t return, then they were never mine in the first place. I know that letting go is a really hard thing to do, one of the most difficult things at your age. It seems like your boyfriend is having some second thoughts about being in a relationship. I wouldn’t take it personally (even though it seems so personal). He might just not be ready anymore. He might want to explore, not being tied down. Timing is really important. Perhaps time is no longer in favor of this relationship. You two have been together for three years. I think you should be heading off to college soon. This is going to be a really exciting time in your life! It’s a completely new chapter, and college experiences are fun! 😉 Going off to college single would definitely not be the worst thing that could happen. What’s important for you to realize is that you are very comfortable with your boyfriend. He is familiar territory. That is what makes letting go so difficult, you spent years of your life thinking that you would be together for a long, long time, but now it seems like that dream is shattering. Let me state a fact: you are not the only one this has happened to.

If it seems like he needs space, I would give him space. Crowding him, or not giving him the space he needs will only frustrate him further, and he’ll harbor negative feelings towards you, which will be really unhealthy at this point. I think one of the most common reasons people break up is that they spend too much time together, so space could be beneficial. When it seems like things have cooled down, then you could try to approach the relationship in a new way, spice things up as you say. Make things fun again, to remind the both of you why you are together in the first place.

If he decides that he likes to be alone, remember that it isn’t about you, he just doesn’t want to be with anyone right now. And if you two break up, I would use the fact that you are single (and have more time for yourself) to find a new hobby, and focus on yourself. I believe that being single allows for self-growth, and helps you find yourself because you’re not influenced by your significant other and have more time.

I encourage you to add more to this dialogue.

Catching those before they fall and helping those who have fallen back up,